There have never been more advantages to choosing a Toyota hybrid vehicle. They combine performance, design and reliability.

WHY CHOOSE A TOYOTA HYBRID VEHICLE?

Power, performance and reliability are the hallmarks of Toyota’s uncompromising hybrids. The hybrid battery in a Toyota hybrid vehicle doesn’t need to be plugged in. It recharges itself while driving. And no additional maintenance is required for a hybrid engine.

With its hybrid vehicles, Toyota has been helping to reduce CO2 emissions since 1997. Toyota's hybrid vehicles can reduce your carbon footprint without changing your driving habits. With all these benefits and a wide range of models to choose from, why not go hybrid?

HOW DOES IT WORK?

Toyota's hybrid vehicles combine an electric and a gasoline system. The two are combined automatically, without the driver needing to do anything. The hybrid engine reduces emissions by up to 70% compared to conventional gasoline vehicles, without compromising performance.

Toyota’s plug-in hybrid electric vehicles (PHEVs), like the Prius Prime, can be plugged in to extend their range in electric mode. PHEVs essentially operate like a regular hybrid, but can run longer in EV (all-electric) mode!

One of the advantages of the Prius Prime is the charging time. This model has one of the fastest recharge times in its class, and no additional equipment is required.

Starting: When it’s started, only the electric motor starts to work, which saves fuel and provides instant torque in most conditions.

Constant acceleration and speed: When driving, the gas engine and electric motor are used in symbiosis, providing the ideal combination of electric and gasoline without compromising power and performance. Excess energy is used to recharge the battery.

Deceleration and braking: When you decelerate, the electric motor takes over. Regenerative braking recharges the battery by converting kinetic energy into electricity.

Stopping and reversing: When the vehicle is stationary, the gas engine shuts down completely and the electric system takes over (unless the battery level is too low), which allows you to save fuel. The same applies when the vehicle is driven in reverse at low speeds. 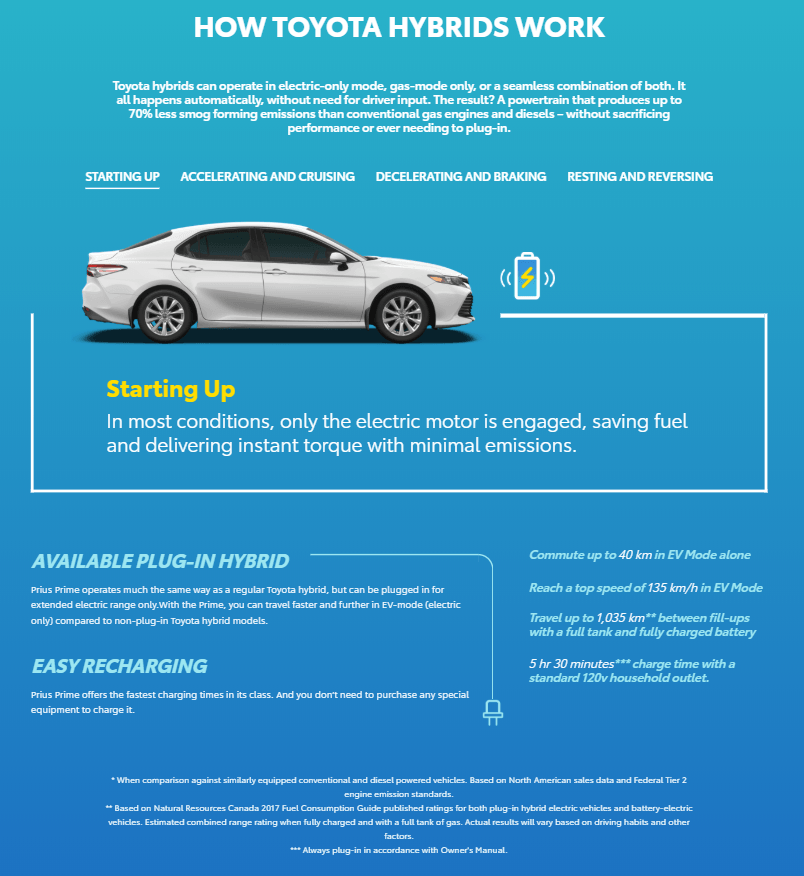 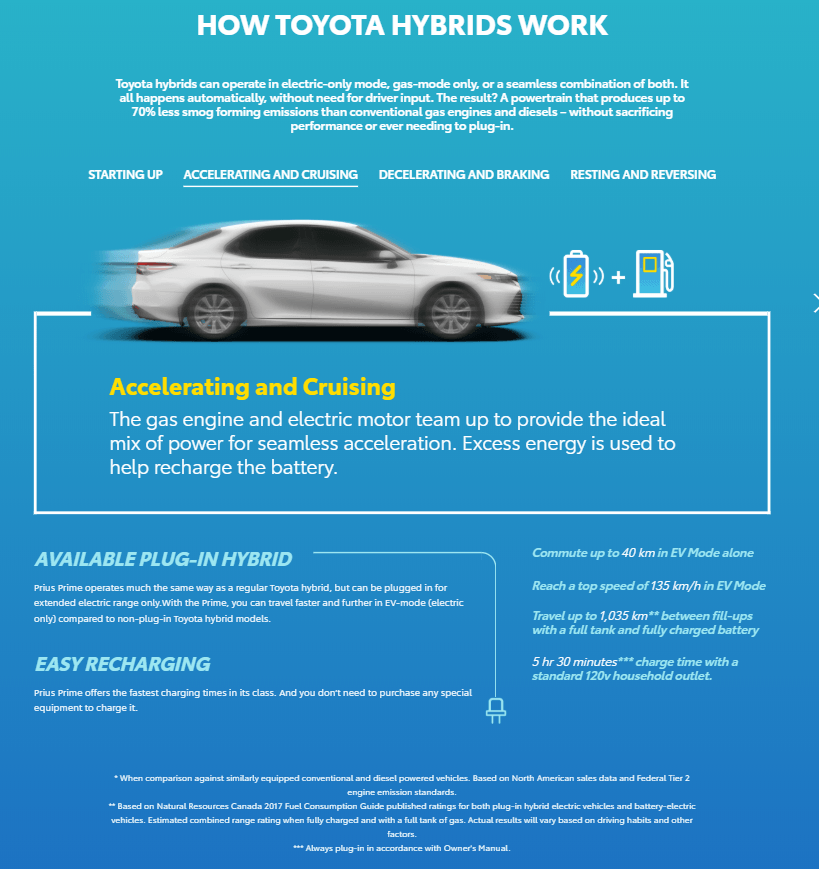 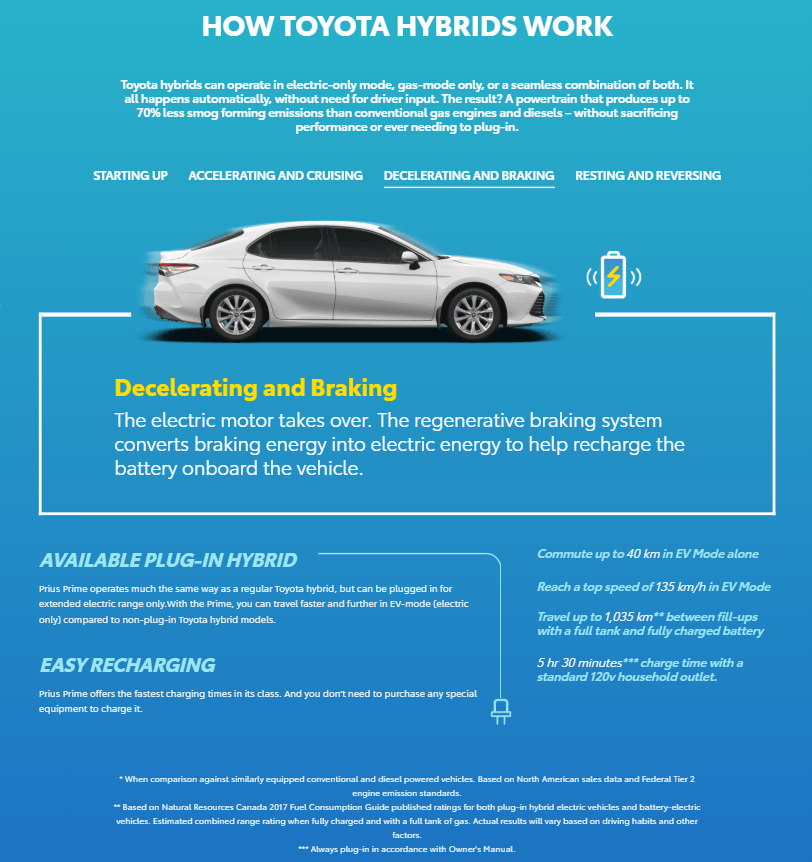 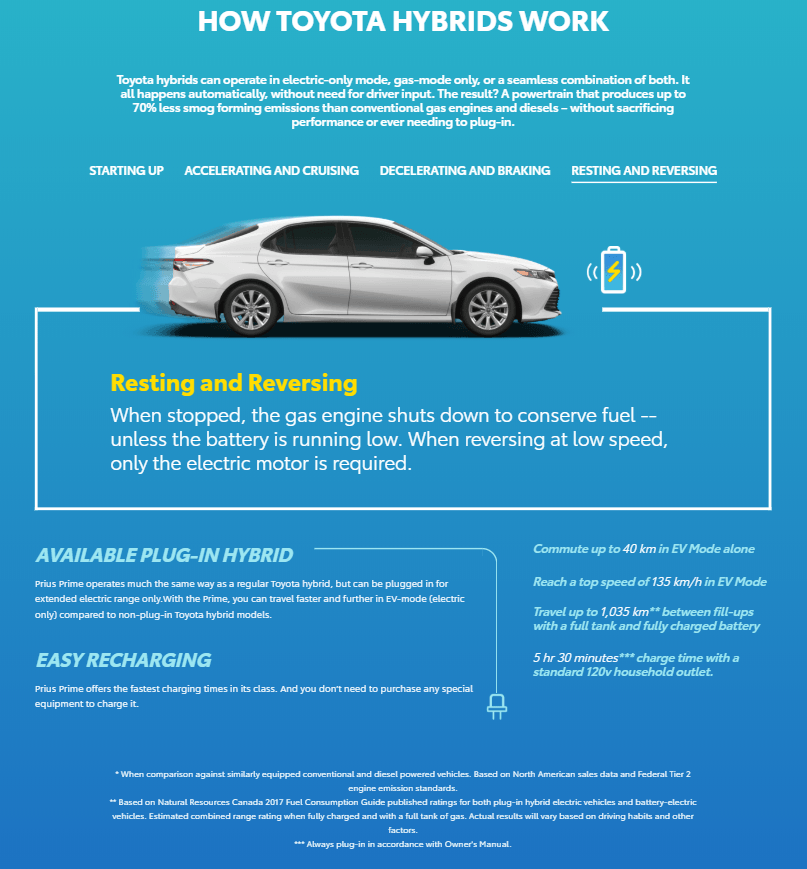 More Hybrid Vehicles Than Any Other Manufacturer 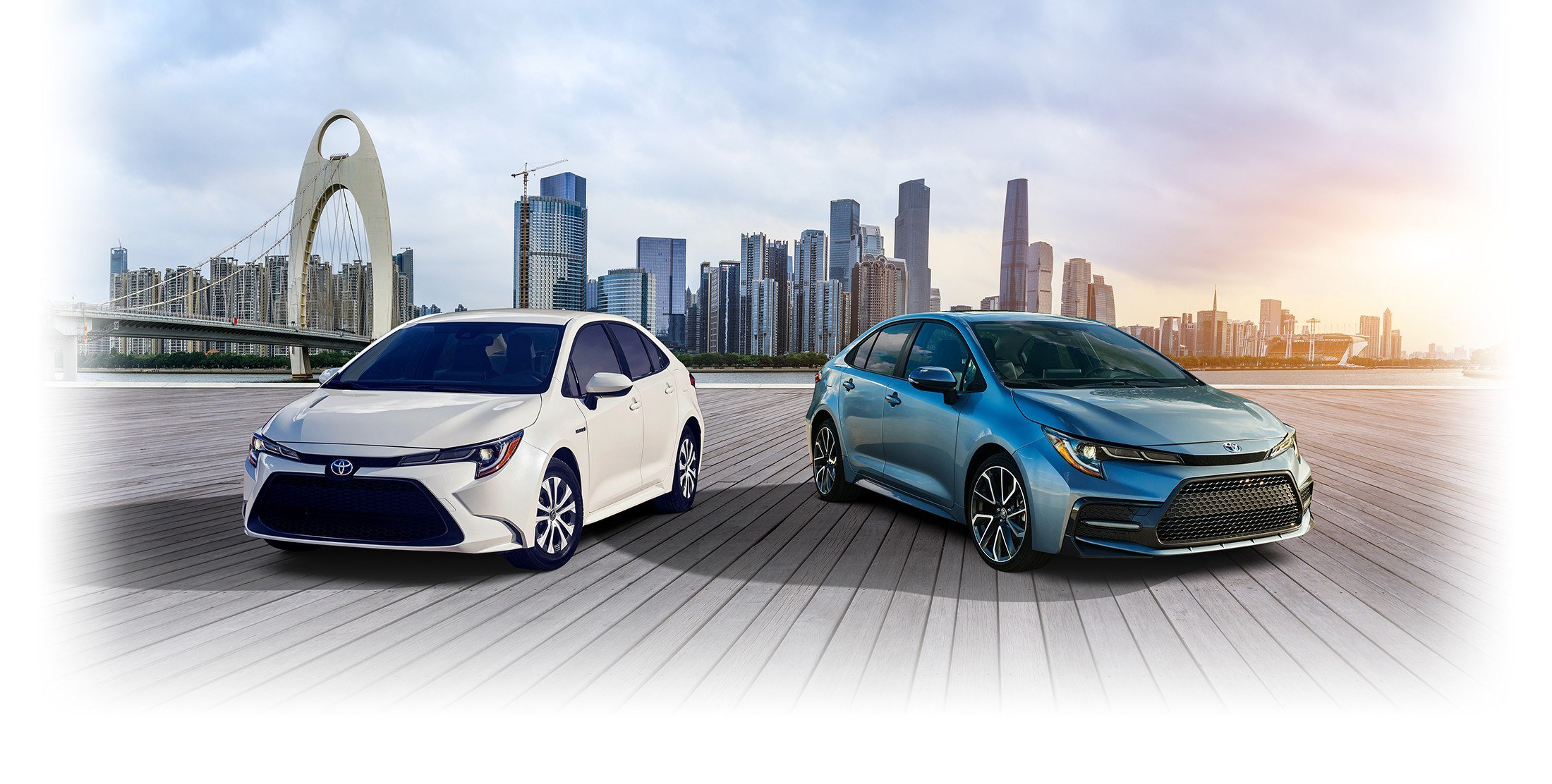 DISCOVER TOYOTA'S HYBRID VEHICLESToyota's extensive hybrid lineup includes vehicles for every need and driving style. From subcompacts to sedans and SUVs, Toyota has a model for everyone.

How long do hybrid batteries last?

The original batteries in over 98% of Toyota hybrids sold in Canada since 2001 have never been replaced. All hybrid components, including the battery, are covered by an 8‑year/160,000 km warranty.*

What are the advantages of a Toyota hybrid vehicle in the city and on faster roads?

Hybrid vehicles have an engine shutdown feature in addition to a longer range in the city (in electric mode). Toyota’s new generation of hybrids also feature high-efficiency gasoline engines for driving on faster roads. On the highway, hybrid systems can switch to electric mode when they’re at a cruising speed. Toyota’s intelligent hybrid system can also analyze and use the optimum combination of electric and gasoline according to the type driving.

Will my driving and refuelling habits change with a Toyota hybrid vehicle?

There is no need to change your driving habits at all with a hybrid vehicle, as it drives like a conventional gasoline car. The vehicle’s hybrid system works in the background and can determine on its own and use the optimal combination of gas and the electric motor. You can also fill up as usual, since there is no need to plug in a hybrid vehicle.

Plug-in hybrid electric vehicles (PHEVs) have the same features, but can also be plugged in to increase their electric range.

Is the performance of a hybrid vehicle comparable to that of a gas-powered vehicle?

The performance of Toyota’s hybrids is equivalent to, and in many cases better than, their gasoline-powered counterparts. The instant torque of electric motors allows for acceleration from a standstill as well as a direct and smooth acceleration.

Do I need to have additional maintenance done on Toyota hybrid vehicles?

No additional maintenance is required for hybrids compared to gasoline vehicles. The same regular maintenance schedule is followed, i.e., maintenance every 6 months or 8,000 km.

In fact, the hybrid system reduces the frequency of maintenance for some other components, including the gas engine, as it is switched off part of the time. The life of the brake pads and discs is also extended, as the brakes are in recovery mode. Hybrid vehicles have no transmission fluid, no alternator, and no belts to replace.

Are Toyota hybrids as safe as gasoline vehicles?

There’s no need to worry about safety in hybrid vehicles, as they meet the stringent Canadian Motor Vehicle Safety standards. Hybrids are as safe as Toyota's gasoline‑powered vehicles.

For example, the batteries are protected from the rest of the frame by a watertight casing and the battery cables are sheathed in orange to make them easier for rescue workers to see. Toyota is also working with emergency services to provide them with any necessary information on hybrid vehicles.

The Toyota Safety Sense active safety suite is also standard in all Toyota hybrids. Hit the open road with confidence!

How do hybrid vehicles support a more sustainable future?

Hybrid systems have their share of benefits in terms of performance, safety and reliability, but also in terms of reduced CO2 emissions. This environmental benefit is even greater as gasoline engines are now more fuel efficient.

Since the Prius was released in 1997, Toyota has saved 94 million tons of CO2 emissions through its hybrid range.*

*In the place of conventional gas vehicles of comparable class and with similar engine performance.

How long have Toyota hybrids been available?

Toyota has offered hybrid vehicles since the release of the first Prius in 1997. Over the years, the hybrid lineup has improved and evolved through innovations and refinements in hybrid technology. Today, after selling 12 million hybrids, Toyota offers the broadest selection of hybrid models of any passenger vehicle manufacturer.

What guarantees apply to hybrid vehicles?

Can hybrid batteries from Toyota vehicles be recycled?

Approximately 98% of Toyota hybrids still have their original battery to date. However, when hybrid batteries are no longer usable, they can be converted to a different use. Toyota Canada has also established a recycling program to repurpose hybrid batteries, in addition to initiatives across North America, such as the Lamar Buffalo Ranch Project in Yellowstone National Park, for a more sustainable future.

Should Toyota hybrids be plugged in?

The hybrid system in Toyota vehicles charges its own battery. Therefore, hybrid vehicles don’t need to be plugged in. You drive and fill the tank exactly as you would with a gasoline-powered vehicle.

How do hybrid cars perform in different temperatures, especially in winter?

All Toyota vehicles, including hybrids, must pass rigorous testing to ensure their durability and performance in a variety of climates, including Canadian winters.

As a result, Toyota hybrids are designed and optimized for winter. The Toyota RAV4 Hybrid is even made in Canada, by Canadians for Canadians.*